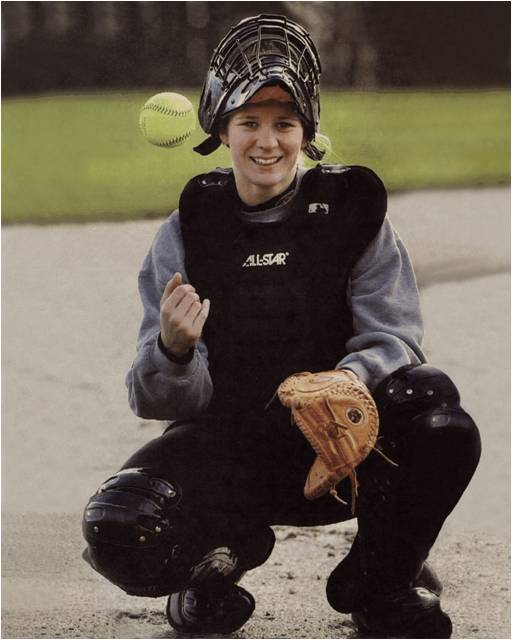 Although the city of Saskatoon has not had much success in producing championship Sr. women’s teams since 2000, it has had its share of quality players play in the city. National teamers like Dione Meir, Jen Gilbert, Meaghan Gurski and most recently NT Pool player Kenzie Friesen. However, we have never had a more decorated international player in our history than Erin Cumpstone Erin is a two-time Olympian and spent twelve years as a member of the Women's National Team program, who retired as a player at the conclusion of the 2012 season.

Cumpstone was raised on softball as she took up the sport at the age of seven. Her mother played competitive fast pitch softball in Saskatoon and her involvement had a profound influence on both her daughters. Her younger sister Meaghan played college softball at Simon Fraser with the Clan.

Erin points out “My parents are my greatest influence because they were the ones that not only got me started but were always there to take me to the park, to get a few extra swings in and to just all-around support anything that I wanted to do.”  She played her minor ball on the city’s eastside. She remembers the rivalry she felt between her and another Olympian Dione Meier. Cumpstone was Meier's foe in minor ball in Saskatoon, Meier was a Phantom, Cumpstone a Hustler.  "There was a rivalry. I'm not going to lie. I did play for a little bit weaker team. It was always tough to get beat. You want to play against the best and you want to beat the best. It's competitive. As a softball player, you aim to be the best.”

After playing for the Hustlers, Erin moved into the Midget Selects program playing in the SASA’s top division where she briefly was a teammate of Meier’s. A number of years later she was to return to the SASA where she joined another Olympian, Jacki Nichol on DBJ Leasing. Upon graduating from Holy Cross High School where she was to be named to the school’s Wall of Honour, she moved out west on a scholarship to play in the Greater Vancouver area for coach Mike Renney. Cumpstone played her university career with Simon Fraser University from 1999 to 2003 capturing a bronze medal at the NAIA Nationals in 2000, a silver medal in 2001 and a gold medal in 2003. She was also selected to the NAIA All-Tournament Team in 2001 as well as the NAIA 2nd Team All American in 2003. After playing her final game for SFU in 2003, Cumpstone returned to the university and completed her degree in Arts. While in BC, coaching was never too far from her mind as she served as a Graduate Assistant at Simon Fraser and later as an Assistant Coach at the University of British Columbia. When she returned from the west coast she took on the role as Assistant Coach for Saskatchewan’s 2009 Western Canada Summer Games team.

Being a catcher, Cumpstone has always been a leader and has shown those skills at the highest levels of softball. She was thought to be one of the best  defensive catchers in the world. Erin lists playing in the 2004 Olympic Games in Athens as her most memorable softball experience. As the starting catcher she helped the team secure an impressive fifth place finish losing 1-0 to Australia in a game that would have gave them a shot for a medal. Four years later, Cumpstone came even closer to winning an Olympic medal when the team lost 5-3 to Australia in the bronze medal game.(seen below) 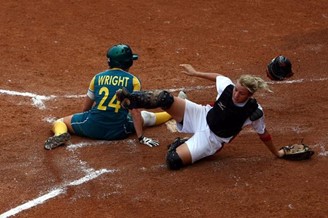 Things changed completely for Cumpstone between those two Olympic Games. At the 2004 Olympics in Athens, Cumpstone was a newcomer to the Canadian softball squad. Canada wasn't quite the heavy hitter that it had been before and is again now. At the age of 28 in Beijing, Cumpstone was all of a sudden, a veteran leader on the squad, but she welcomed the role.  "I'd like to play a leadership role, on and off the field. I know what to expect and just not to make it bigger than it really is. Yes, it's the Olympics, but each game is just another game. The base paths are still 60 feet.”

As a 29-year-old, Cumpstone helped Canada win the bronze medal at the 12th International Softball Federation Women's World Championship in Caracas, Venezuela in 2010. The medal for Canada was only its second in the history of the championship, which started in 1965. It was their first as a National Team Program, as Canada won a silver medal in 1978 in El Salvador with the Vancouver Doc's Blues, the last club to represent Canada at the world championship before the national team was formed. Canada did win another bronze in Surrey 2016. With 4th and 5th place finishes at the Olympics and a bronze medal at the world championship, Erin has been part of the most successful women’s teams that Softball Canada has produced. When she talks about what it takes to be successful internationally, players listen. As a player,

Erin is an outstanding role model for developing softball players. Many up and coming catchers see her as the example they want to emulate, not just in softball but in sports in general. She is a multi-sport athlete. Erin has been very busy with hockey and especially ringette. She was a member of Saskatchewan’s Canada Games ringette team in 1999 and later made the Canadian ringette team that participated in the World Championships in Finland in November 2010. In 2017 she was named Ringette Saskatchewan’s Coach of the Year.

Playing other sports at a very high level helps keep her grounded and well rounded. But it is in softball that she seems destined to be a great coach. Her technical knowledge receives a lot of national respect as well. As a player she was well known for her game calling abilities, and for being very technically sound as a hitter and behind the plate. So after she retired she seemed the obvious choice to help write Softball Canada’s coaching manuals. Her valuable insights have played an important role in updating the catcher’s skills section of the manuals and thus will be helping coaches for years to come. 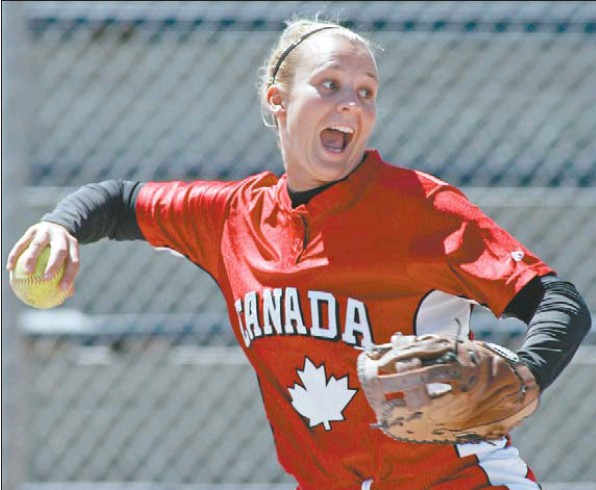