Dione Meier and Her Olympic Moment

Dione Meier and Her Olympic Moment

It was a hot and rainy August day in Beijing China at the Fengtai Softball Field, which happened to be the softball venue for the 2008 Beijing Olympics. Although almost everyone there was busy trying to find a dry spot to wait out the rain, Dione Meier was out in the rain, stubbornly going nowhere. She just couldn’t leave the diamond. This was her big chance, to be in the circle on the biggest stage, the Olympic Games. She was pitching against the highest profile team, the Americans, and was dominating. Meier had never had so much confidence, everything she threw seemed to be working. The most decorated softball country in the world had not scored a run and were losing to Meier and Team Canada 1-0 before the rain came.  Her frustration was obvious as she wondered why did it have to rain? It didn’t seem fair; this was the one game that Coach Lori Sippel had trusted her with. Nobody expected Canada to beat the defending gold medalists. Meier was one of the last pitchers selected to the team and Sippel didn’t want to use one of her top pitchers against the Americans who likely would beat anyone. So, it may have seemed logical for the coaching staff to save their best from a game they would lose anyway. Meier was to have none of that, as when she got news she that was starting, she told Sippel “You better not be planning on throwing this game, I plan on wining this”.

She entered the game knowing it was her big chance to have her own Olympic moment and she was going to take full advantage of it, but after 4 innings the rain just kept coming. As she sat down in the circle staring at thousands of fans and her teammates scrambling for cover, she would not let this moment get rained away as who knew when a moment like this would come again. 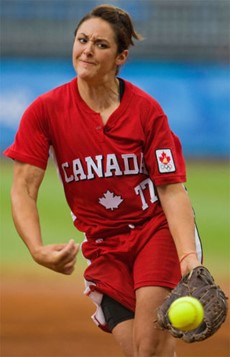 The next day brought great things for Canada as they beat the heavily favored Chinese team in their own home ball park to stay undefeated. However, it did much to limit Meier’s personal Olympic experience.  Meier was kept in the Olympic village for the game against China so she could stay strong for the continuation of her start against the Americans the next day. When that day came Meier seemed ready, but much of her team was not. Coming off the emotional 1-0 win over the Chinese and then being forced to get up for the powerful Americans with their ace, Cat Osterman in the circle, Meier’s defense crumbled under the pressure. She maintained her confidence through to the sixth inning when she gave up the lead, then in the seventh the Americans pulled away for an 8-1 win and Meier’s time in the Olympic spotlight was over. She did not see the circle again during the Olympics and Canada went on to lose every game. The most disappointing of which was the game for the bronze medal, which they lost 5-3 to Australia. With the final out of that game, Team Canada’s Olympic experience was gone, just as Meier’s personal moment had been taken away by the rain 6 days earlier. Little did anyone know that the Olympic final game played two days after the Canadian loss was destined to be the last Olympic softball played for a very long time as softball was dropped from the Olympics one year later, making the disappointment of Beijing even more long lasting. Although too late for Meier, softball will be back in the Olympics for Tokyo in 2020 and Canada will have another shot at a medal.

Meier’s story should not be seen as one of disappointment but of perseverance through adversity. She had a number of Olympic moments on the way to that one in the circle against the Americans. She still rates one of the highlight moments of her life as entering the Olympic stadium for the opening ceremonies, while singing O’ Canada in front of more than 90,000 screaming spectators.

She also remembers the joy she felt when she received the news she was on the Olympic team. After returning from a tough Pre-Olympic tournament in China she locked herself in her room for 2 days waiting for the call from the coach, knowing there were still 5 cuts to be made. When Sippel gave her the good news, Meier said it was one of the most emotional moments of her life. Her mom, who had always been one of Dione’s greatest ball supporters, peeked through the door when Dione was on the phone with Sippel and for what seemed like a very long time could not tell by Dionne’s facial expression what was she was told.  However, once their eyes met the emotions came pouring out in a moment Dione will always savour.

Getting to the Olympics was not easy for the talented right hander, as she took somewhat of a circuitous route. Her softball life started simple enough, playing on the playground of Meadowgreen in Saskatoon’s west side. From there she moved on to the Phantoms zone for Squirt through Bantam, and then into the Midget Selects Program. She remembers some great coaches in her minor softball years. Ones like Gord Sick, who always pushed her to get better. Throughout her minor years, she had the feeling that she could never relax as there was always someone just as good or better around, maybe even on her own team or pitching for the opposition in the next game. In these years, she met up with the woman who was to be her catcher in the 2008 games. Erin Cumpstone was Meier's foe in minor ball in Saskatoon as Meier was a Phantom, Cumpstone a Hustler. 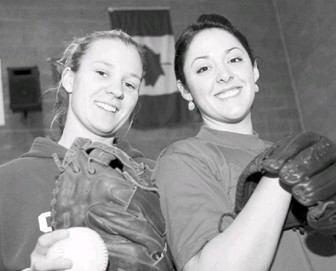 "We were from different zones, so we played mostly against each other, but we played together a little bit in Midget," says Meier. Both Meier and Cumpstone were part of the Saskatoon Minor Softball League’s Selects Program.

After graduating from E. D. Feehan High School she went off to college in the U.S.  Meier attended Junior  College in Galveston, Texas, where she led the team to a conference title and was named a National Junior College Athletic Association First Team All-American. Following her stint in Texas she moved on   to a four-year NCAA school in Louisiana. It was there that she rewrote the Nicholls State and Southland Conference record book by fanning 341 batters in just 223 innings. After she finished her college career she played a season in Australia, followed by a year in Italy and then another season down under. Getting away from college and into a totally new environment was huge for Meier’s pitching. In the time she spent away from North America, she learned how to be a pitcher, not just a thrower, with a great strikeout rise ball. It was in Australia that she developed her curve and drop and began to really understand the mental aspect of the game.

“After that, I came back home. I just wanted to give it one last shot to see if I could get myself onto the national team," says Meier.  She continued to work on her game with pitching coach Don Bates and sought out the assistance of sports specialists like Bruce Craven for physical performance and Ralph Schoenfeld in sports psychology.  The National Team came calling after she was selected as the Top Pitcher and Most Valuable Player at the 2006 Canadian Championship while playing for the Delta Sunfire. In 2007 she attended the National Team training camp in Las Vegas from which she got the invite to the tournament in China, that help solidify her spot on the team going to Beijing. 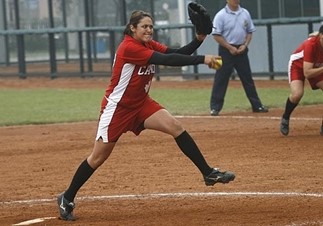