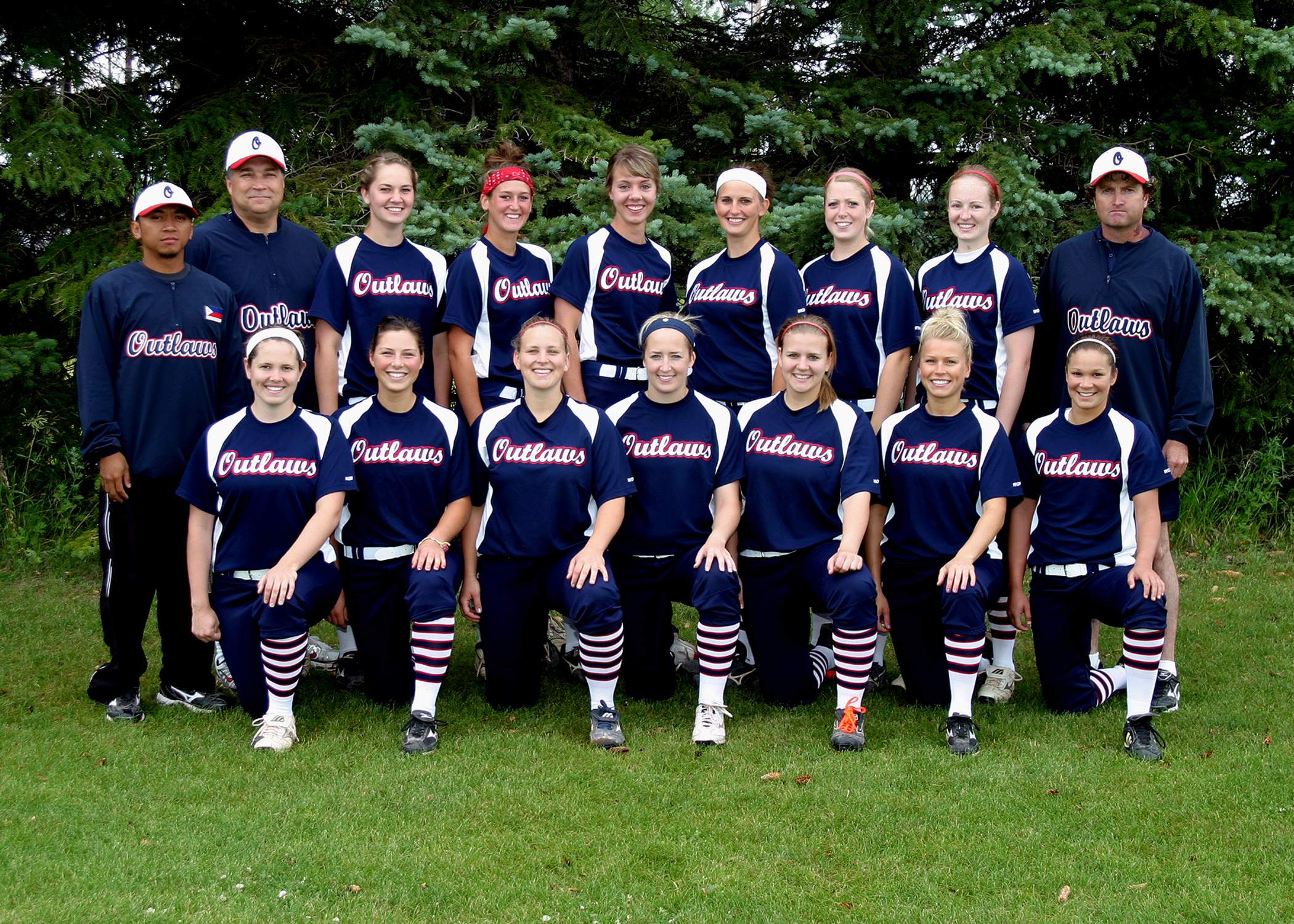 Saskatoon has been home to several very successful women’s softball teams. The late 1960’s and early 70’s produced the famed Imperials, a decade later saw the rise of the great Saskatoon Harmony Centers teams and 20 years later DBJ leasing started the new millennium with a national title. These teams left a lasting legacy for the sport of softball in the city. The team that eventually carried that torch into the 21rst century was the Saskatoon Outlaws. Unlike the great teams mentioned above, the Outlaws enjoyed their greatest success in the Junior women’s category. However, with this being the first championship where basically the Junior and Senior women championships combined, it seemed appropriate to bring their accomplishments to light.

Few people would have expected that the old Saskatoon Minor Softball Squirt and Pee Wee Phantoms vs. Hustlers rivalry, would have become the roots of one of the most successful women’s program our city has ever seen. Phantom’s Coach Earle Woodside and Hustler’s coaches Ben Garchinski and Gord Guenther squared off in many tournament finals when their kids were just becoming teenagers. By the time the girls were old enough to play in Western Canadian championships, the competition had pushed the players to become amongst the best in the west. The two Pee Wee westerns for this group saw the Phantoms win both gold medals. The first one in 2002 saw a pair of future Outlaws earning accolades, Earle’s daughter Natalie was the Outstanding Pitcher and Ben’s daughter Lindsey being named outstanding hitter. The next 2 years in Bantam saw the Hustlers win a gold medal in 2004 and Gord’s daughter, future Outlaw and Hustler ace, Katherine named outstanding pitcher in both years. That year the Phantoms won provincials and opted to go to nationals. The old Hustler vs. Phantom teams produced many great Outlaws like: Guenther, Woodside and Garchinski as well as infielders Anne Kelly and Lindsay Koscielski. It more importantly created an expectation for success for girls of that age group in Saskatoon.  Following the Bantam years, a number of the Hustlers and Phantoms players were combined into a first-year Midget team under the leadership of Woodside. Lauren Mills and Lauren Bourdon were a couple of key additions to the local mix during the team’s Midget year.

The Outlaws era officially began the next year in 2006 when the team was known as the Outlaw Selects. That year saw the start of a run of 8 straight provincial championships in categories from Midget to Senior A. Always competitive in Midget nationals, the Outlaws could not get the big win to move them into the medals. When the nucleus of the team stayed together into Junior and was added by a number of players who moved into Saskatoon either for university or to play for the Outlaws, the team really took off. They shocked everyone but themselves, in 2008 when they went into Sumerside PEI and took home the Jr. women’s title ending an 8-year drought for Saskatoon’s women’s teams at nationals and becoming the first ever Saskatchewan team to win Jr. nationals. The only other Saskatchewan team to win this championship was the Saskatoon Co-op G Force in the last year it was held 2016.

The Outlaws did not have too long to enjoy their new- found success at Jr. nationals as in 2009 four of their top players were prevented from attending due to their Nursing Program commitments and they slipped to a 5th place finish. They responded big time however, in their next nationals. Facing the pressure of the home crowd in Saskatoon as well high expectation because of the championships 2 years earlier, they dominated the field. They were led in the circle by the championships’ outstanding pitcher Kelsey Garner with support from Guenther and Woodside. At the plate the Outlaws counted on the bats of Koscielski and Kelly as the team further met the city’s high expectations. The next year they traveled to Windsor, Ontario and won it again joining the national Junior women’s powerhouses of Chinguacousy Cougars and Ampton Blazers as a group of players to win 3 Canadian championships.

The Outlaws hung around for a little while after their Junior success. They added former Olympian Dionne Meir to their squad in 2012 and finished 7th at Senior nationals and won the Sr. B Westerns held in Saskatoon in 2013. With the nucleus of players busy pursuing their careers and coach Woodside busy with the farm, the team scraped together one more year in 2014 winning an SASA league title but did not enter provincials.

The success of the Outlaw program was a major factor in the creation of the University of Saskatchewan Women’s Softball team in the fall of 2008. This program continues  to provide  opportunities for ladies attending the U of S to play in the Western Collegiate Fastball League Association throughout the fall and attend the Canadian Collegiate Softball Association National Championship on the Thanksgiving weekend. The first Head Coach was Earle Woodside. The team had immediate success as the U of S won the national title in their first year of existence. The U of S softball program has won 6 CCSA national titles and will be coached his year by former Outlaw player Katherine Guenther.

The Outlaws have had tremendous success winning 8 consecutive provincial titles, 3 National and 1 Western Canadian titles, as well as numerous league titles. However, their success is about more than just medals, with the role the coaches and athletes played in forming the U of S Softball Program, and through players giving back as coaches like Guenther and former Outlaw outfielder Lauren Mills at the U of S. Mills and Garchinski are also part of Saskatchewan’s Western Canada games coaching staff.